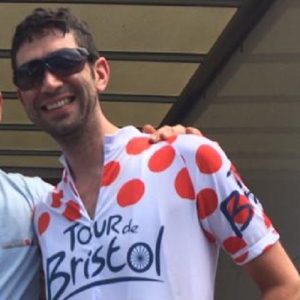 I got my first road bike 10 months before I took part! I’d cycled a couple of miles to and from work on a flat bike path on an old mountain bike for years but if we’re talking about sport rather than commuting, my cycling experience was almost none. I’ve been doing Kung Fu since my mid twenties, I’d run a couple of 10ks and played football on and off – a very average amount of sport and none of it would have pointed to me taking part in this.

I signed up to cycle 4 stages through the Dordogne and Pyrenees and I loved it beginning to end, even the training. It was very fulfilling to take on a challenge so big, learn a new skill, see myself improving and achieve the goal.

I’m not a member of a cycling club and didn’t really have a solid group of mates to train with so I signed up to 9 sportives starting in January and taking me through to May, which gradually increased in length and difficulty. That was completely worth it because it meant I didn’t have to think about long ride training routes - you just sign up, turn up and it’s all organised for you.

I found the ride itself very challenging, but that was probably the point of signing up in the first place. I wanted to do something new and tough in a beautiful place that I’d never been. The Pyrenees were even more amazing than I’d heard and I can honestly say that I enjoyed the mountain stages even more than the flatter stages - once you get used to climbing, it’s actually really enjoyable!

The rest of the group were a great laugh and despite signing up on my own, I met loads of great people, felt very welcomed and would reassure anyone else thinking of taking part on their own. You’ll meet loads of people and there really are people cycling at all speeds (I was a bit worried about that before which is probably normal).

I have two Bruce Doscher prints on the wall in my lounge which remind me of quite what I achieved. I definitely got the road cycling bug but now I cycle as part of a normal life, not training every weekend. I’ve done a few sportives with work colleagues since Le Loop and when it’s sunny, it’d be my first choice of sport.