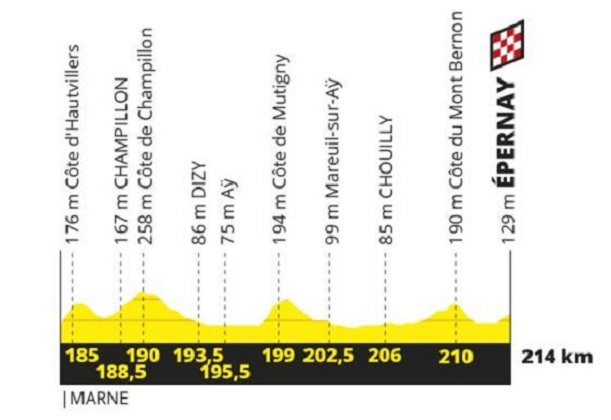 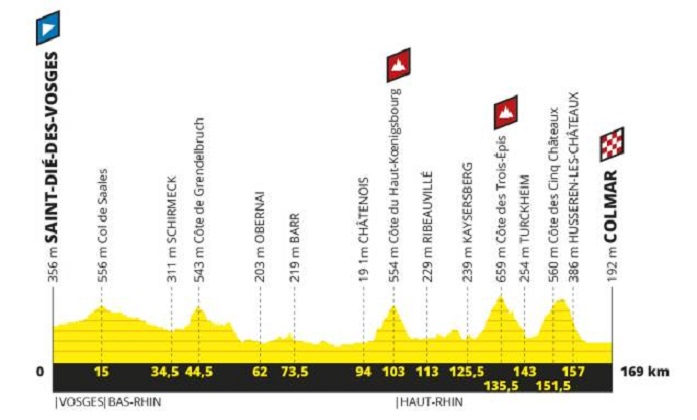 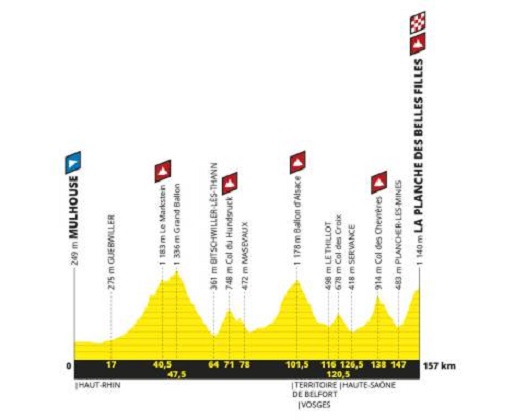 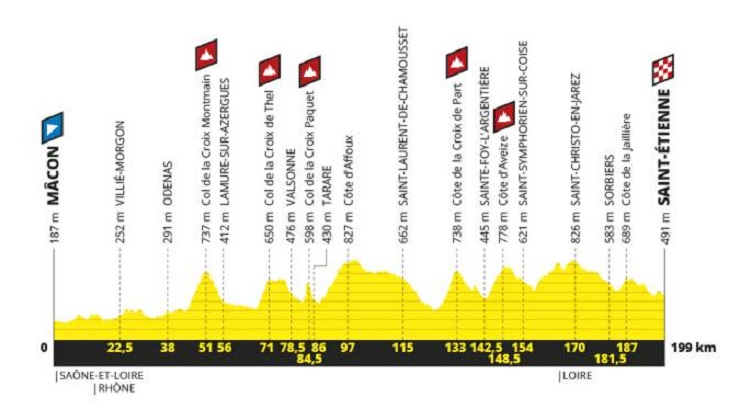 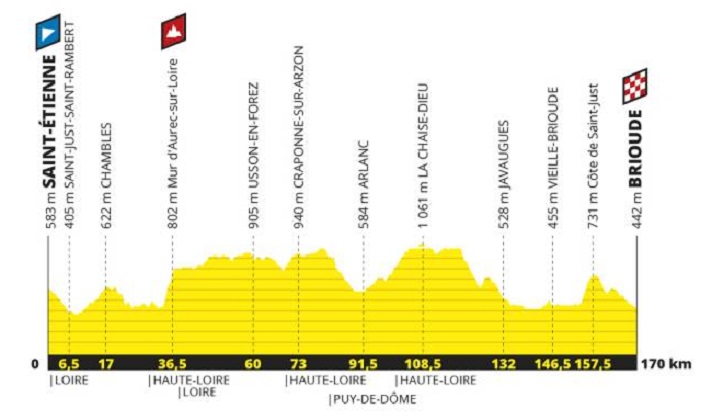 With half the total number of categorised climbs coming in the first ten stages of the tour, and 200 more kilometres than the last ten stages, this Loop offers rare, first-week variety and an awful lot of cycling.

After the Belgian ‘Eddy-Fest’ stages, two beautiful sprinter stages separate you from discovering the lesser known jewels of the Vosges region and the steep, remote roads of Alsace (these were the very first climbs ever thrust upon the riders in the early 1900s, before the Tour ventured up into the wilderness of Pyrenean goat-tracks).

Then it’s another flat (that’s ‘flat’ to the Tour, rolling-to-lumpy to the rest of us) stage along the ‘route des vins’ and two more middle mountain beauties that bring you to Albi. These Massif Central stages will blow you away: hilly enough to be a big challenge and beautiful enough to make you wish you had another week!

From Brussels we roll out through the busy Flemish countryside towards the iconic Muur Geraardsbergan, a cobbled climb made famous by the Flemish Classics, whose gradient reaches 20% at its steepest. Then, after tackling the lesser Bosberg, we’ll turn south, and follow flatter (and smoother) roads through Enghien and Charleroi, passing the site of the 1815 Battle of Waterloo (you can choose if you doff your cap/helmet to Napoleon or Abba) before re-entering Brussels via Woluwe-Saint-Pierre, Eddy Merckx’s childhood home. In 2019 the flags will be out for Eddy, it being 50 years since he first won the maillot jaune in the 1969 Tour.

A smashfest for the pros, but an easier day for us, as we’ll ride a mere 27km (plus a few kms to and from our hotel) along the majestic avenues of Brussels, finishing at the park Ter Kamerenbos in the north of the city, close to the Atomium. With a high point of 109 metres, and no gradient stronger than 4%, this will be an opportunity to rest our legs, save our energy for what’s to come and maybe make time for some local produce (frites, biere, or both!)

We leave the medieval ramparts of Binche, finally arriving on French soil as we head south through the ancient forests and hedge-trimmed lanes of the Avesnois national park. This will be great for group riding with the second half of the stage in a particularly picturesque part of northern France. The landscape will open out as we find ourselves in the rolling Champagne region (cue vinyards and chateaux), and the afternoon will feel almost hill as we enjoy a series of short punchy climbs in the final 30km, before a short warm-down along the Marne valley into Epernay.

This slightly flatter stage will be a showground for the sprinters, and for us a wonderful day out enjoying a good deal of ‘Tour Tarmac’ whilst swapping the wide open skies of the Champagne region for the pretty lake-filled landscape of the Lorraine National Park (home of the quiche!). This is a lesser-known part of France for tourists, but absolutely worth a visit for the Germanic architecture and crisp white wines! Expect a fast-ish, flat-ish run into Nancy, though after 215km, will anything feel particularly fast or flat?

It’s time to engage our uphill muscles, as this stage includes two categorised climbs and has a much spikier profile than the preceding stages. These bigger climbs sit alongside some more-minor-but-still-significant bumps as the Tour showcases a stunning corner of the country (this stage is one for the TV helicopter). Expect leafy climbs and descents, open farmland, and some spectacular views as we make our way north and then south, alongside the German border. There will be plentiful chateaux towards the end of the ride, to reward us for the hills (‘Trois Epis’ and ‘5 Chateaux’) we ride up to reach them!

This will surely be the defining stage of the Tour’s first week, and one we’ll all remember, for its beauty as much as its difficulty. We finish on la Planche des Belles Filles, which this year features an extra section with a 24% gradient. But… lets not get ahead of ourselves… before that we must tackle (and admire panoramic views from) the Markstein, the Grand Ballon, the Col du Hundsruck, the mighty Ballon d’Alsace (the first official mountain climb to feature in the Tour de France, back in 1905), and the Col des Chevreres which is short but very sharp. The roads are quiet and rural which will help us enjoy what amounts to over 4000m of climbing. It’s a tough gem of a stage with all the ingredients (including some defining manoeuvres from the pro peloton) to make it a tour highlight.

It doesn’t matter how you cut it, 230km is a long, long way! Fortunately this stage will be flattish in the morning and actually flat in the afternoon – providing the perfect opportunity to team up for group riding as we roll south-west through wooded slopes, fields, forests and river valleys. Save some energy for the final kilometres into Chalon-sur-Saône, where British rider Brian Robinson won his second Tour stage in 1959, with a gap of 20 minutes. If you pace yourself and enjoy the company, there’ll be plenty to enjoy on stage 7 – and plenty of bike-time to enjoy it!

This will be a decidedly bumpy day, with 3,800 metres of ascent, and five categorised climbs, though never more than 6km of uphill in one go. We’ll warm up our legs with a gentle climb out of the Saône valley, through Beaujolais vineyards and forested valleys, before tackling the Col de la Croix Montmain and then swooping down into the Azergues valley. For every up, there must be down and we’ll be rewarded with some spectacular (and not too technical) descents: cycling joy, TDF style! The second half of the day will take us through an enchanting landscape of winding lanes, wooded climbs and spectacular views, before we descend to Saint-Étienne, home of bike wheel manufacturer Mavic.

This is another hilly stage, with barely a kilometre of flat road, through the Auvergne region which, with its ancient stone farmhouses, open pastures and glorious pine forests, will feel like we’ve gone back in time to another world. The main challenge will come a couple of hours into the day, in the shape of the Mur d’Aurec sur Loire, a 3km climb with a leg-busting average of 11%: this is proper mountain climbing! The worst (best?) is over at that point, though the road carries on up and down all the way to the final descent into Brioude, Romain Bardet’s birthplace (a stage to watch a week later when pressure on the poor French man will be at fever pitch).

This stage ends 700m lower than it begins, but don’t be fooled – there’s still plenty of climbing involved and plenty of kilometres to spread it over. We’ll start the day exploring the ancient volcanic region of Cantal (famous for its cheese and associated calorific delights), before a long descent from the plateau (woohoo!). The relatively fast kilometres of the first 100km will be countered by a more measured afteroon, when the route takes us through the Gorges de la Truyère (spectacular rock formations and the cool breeze of a rock-shaded road) and then up onto the lofty Aubrac Plateau. The quiet, narrow roads of the Massif Central will open out as we descend towards Albi: It’s a gently descending last 30km with our destination visible in the distance, and although you’ll be pedalling the whole way, you won’t have to work too hard for these last, heroic kilometres. 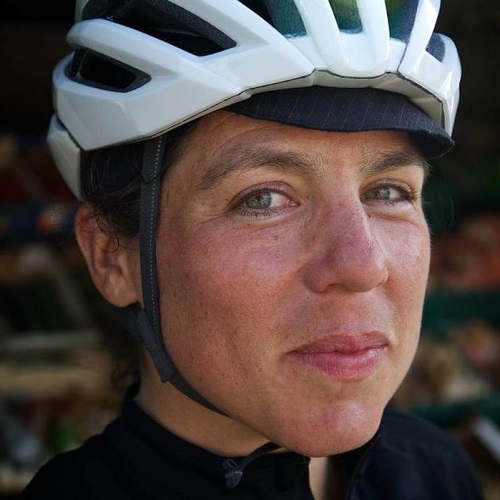 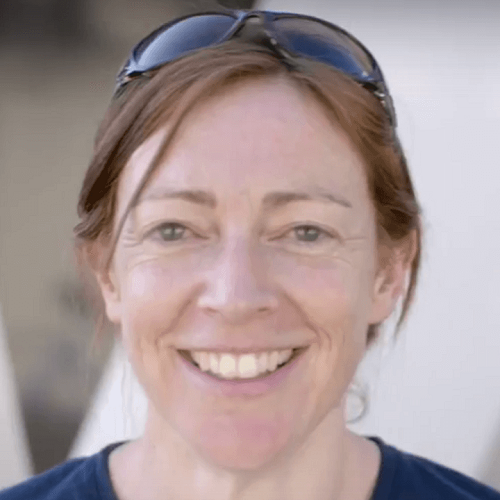 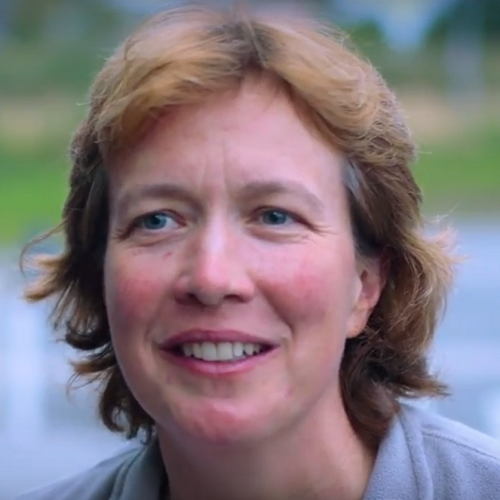 Emily, Lead Cyclist says, “I just cannot wait! This is a tough first week but if you want to test yourself, 10 days non-stop on these roads will be the best!”

Sarah, Event Organiser says, “Throughout the week as we head south and west, there will be marked changes in landscape, architecture, cycling heroes (and cheese). This is the way to get to know France, and the Tour de France, better.”

Annabel, Alumni Cyclist says “I cycled in the Vosges in 2014 and would love to go back. I remember the Grand Ballon and Planche des Belles Filles being pretty brutal but it was sooooo worth it. Just take your time and you’ll get there!”