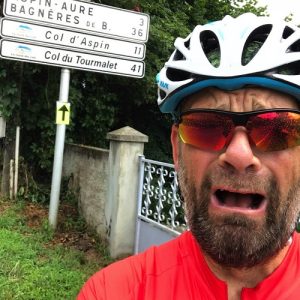 When I signed up for Le Loop, I didn’t even have a road bike. An “intermittent” Mountain Biker in my younger years, I had completed LEJOG in my twenties, so where I had an idea of what a long day in the saddle looked like, I had no mountain experience. Knowing I was up against it, I borrowed a bike from a friend and got some serious training miles in. I had become very unhealthy, and having turned some self – harmful behaviours around, I was looking for an avenue to continue my journey and see how far I could actually push myself. After all, if I had achieved something I previously thought to be impossible, what else had I talked myself out of?

When I got the confirmation I’d got my place to ride the Grand Loop, I didn’t know whether to laugh or cry!

Riding le Loop was arguably the most rewarding, challenging, life-affirming and enjoyable thing I have ever done. Each day brought a new challenge, and I soon learned the hardest days were not necessarily the ones you anticipated. I had expected to be at the back and riding solo most of the time. Being inexperienced at group riding, I hadn’t really considered the beauty of the teamwork in a peloton and the companionship I would encounter on the road. Turns were taken at the front, encouraging words were given and received, and friends were made for life. I did video blogs as I went, and shared my journey honestly, developing a surprisingly enormous following as I went. People saw me laugh, cry, celebrate, beat myself up, marvel at my own achievements and they watched an overweight 50-something who has battled alcohol addiction for most of his life transform and blossom into something approaching a competent cyclist. I lost over 30lbs in training for Le Loop and a further 14lbs on the road, while all my health issues have been resolved. Extraordinary! What did Le Loop teach me? It taught me the value of patience and the ability to endure – big goals are achieved in smaller chunks and the game is won and lost in your head. Climbing the Croix de Fer on the infamous Alpe D’Huez stage (on which I finished at 11pm!) in around 4 hours was made manageable by bumping into friendly faces in an alpine village and sharing a bottle of coke and a chocolate bar, before pressing on. The organisation of the event was extraordinary, and at times the schedule was brutal with transfers to starts / hotels at times being as tough as the pedalling. The whole thing was faultless, and the Le Loop team were genuinely unbelievable – supportive, patient, encouraging and supremely effective at making sure that things happened when they were supposed to. But for me, Le loop was about the “moments” I will treasure for the rest of my life: Playing like children with fellow riders in a water fountain on the Lacets de Montvernier (and in most of the other Alpine fountains, if I’m honest) Hearing a fellow Grand Looper describe us as ‘like an old married couple’ to another cyclist Shouting and swearing alone at myself on a climb only to look round and find an 80 year old French cyclist tucked on my wheel shaking his head in despair at me. Staring at Strava in amazement at my record descents of the Mur de Bretagne & Col de Portet and realising Isaac Newton was right about gravity when you weigh 100Kg Sharing a hug with a fellow Looper in the freezing rain at the top of the Tourmalet who had just laid some demons to rest Climbing the Pic de Nore in the searing heat with two epic guys and whoever got to the next kilometre marker first, shouting back, “more shit” or “less shit” depending on the upcoming gradient. (And then snapping my crank within sight of the top!) Getting a text message chasing me for my blog from someone because “their kids were waiting for today’s update”.

From a life and business perspective, I now help people with alcohol issues and for sure completing the Grand Loop achieved my objective of portraying a positive image of life without a glass in your hand. I am fitter, stronger, healthier, and have a genuine knowing that my limits exist only in my head. I have signed up to do the Mallorca 312KM sportive in April with a bunch of fellow loopers and frankly cannot wait to see them all again. We are also looking at the three ascents of Ventoux, and I am planning recruit some friends to do a few stages of Le loop in the mountains too. I have another Grand Loop in me without doubt, but not next year. If you are looking into doing a challenge like this, I can’t imagine a better organised way to do it. I didn’t know too much about WWMT before I signed up, but meeting some of the kids at the training camp and in the Pyrenees affirmed to me the awesome work they do and as the event went on, this became the biggest motivator.