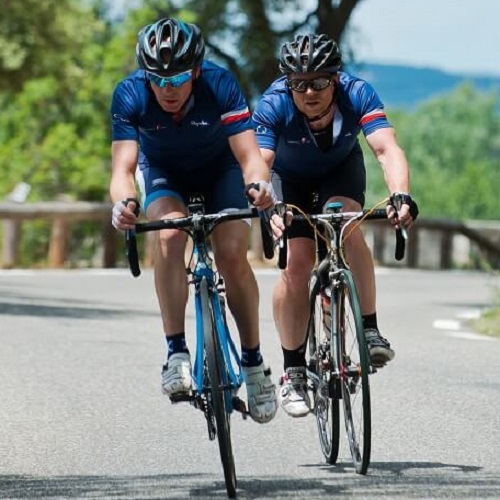 Before I signed up for Le Loop the first time, I had a road bike but I didn’t use it regularly. I’d bought it a couple of years before for the London to Brighton ride which had almost killed me. So I’m not really sure what made me first agree to cycling 8 stages of the Tour de France – probably enthusiasm and bloody mindedness!

One of my biggest motivations was to raise money for the William Wates Memorial Trust. I knew William and wanted to do something in his memory and contribute to the amazing work that the charity does to help disadvantaged young people. Over the years I’d heard a lot about how the money that the cyclists raise is spent and I wanted to be a part of that.

My training plan was more ad-hoc than it should have been. I went out cycling with mates quite a bit in the 6 months leading up to the Tour and I started going to spinning classes. I also did the Le Loop training weekend and the Tour of Wessex but that’s probably as ordered as the training plan got: there was no strategy but I put in quite a bit of time and effort and made sure that the long rides happened.

The event itself was everything I’d hoped and more. I had a couple of mates who signed up with me and one of them brought some colleagues along. The banter all day every day is the best. I had more of a laugh taking part in Le Loop than I’ve had doing any other group activity ever. It’s great fun beginning to end, whoever you’re cycling with.

If I had one piece of advice for anyone else taking part, it’d be to pack more clothes. 98% of my time in France on a bike was sunshine and summer but the 2% when it rained is the 2% you remember if you don’t have all the layers (and I don’t mean just one posh cycling jacket – if I went again, I’d pack a fleece, a goretex hiking jacket and five pairs of winter gloves!!).

Where are you now:

With a new baby! I still manage to get out on my bike a bit and I’d love to do Le Loop again in another year or two but for now it’s memories of sunny mountains in the knowledge that a few Saturdays on Dartmoor is my limit for now.