We had a very exciting day yesterday at the Palais de Congres watching the 2020 Tour presentation: Chris Froome limped across the stage to a huge round of applause, Egan Bernal crossed the stage to even more applause and Thibot Pinot got the biggest roar of the day. So the stage was set and the route was revealed.

– 2020 has the shortest ‘longest stage’ at ‘only’ 218km. A great fact, but countered by the lack of time trials until the very end (ie. half day for us) means that it’ll feel pretty non-stop.

– The climbs to look out for are the Meribel col de la Loze climb (which looked absolutely amazing on film at the presentation), the steepest route up the Grand Colombier, the back road up the Madeleine and the new-to-the-Tour col de la Hourcere in the Pyrenees.

– The Pyrenees may be brief (we’ll spend more time in the Massif Central!) but the two medium length mountain stages are absolutely briliant. Difficult to describe to people who haven’t been there but if the sun is shining, these maybe the loveliest two days cycling of the Tour. 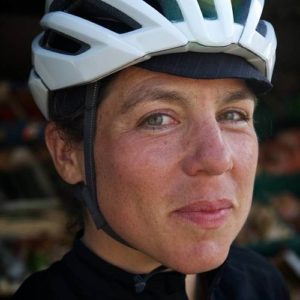 And what does our lead cyclist Emily Chappell reckon to the 2020 route? …

“This route is going to be both a treat and a challenge. So many new and rarely visited climbs to explore – and so many steep steep gradients! But I’m particularly looking forward to:
1. Stage 2, especially Col de Turini. The area around Nice is so beautiful and I’m delighted to have the excuse to explore it a bit more.
2. Stage 6. It looks like we’ll get to see the Gorges du Tarn and then pay a visit to Mont Aigoual, as immortalised in Krabbe’s The Rider (which I’ll be recommending in one of my training blogs!).
3. Orcieres-Merlette on Stage 4. It’s the site of a rare defeat of Eddy Merckx (by Luis Ocana in 1971). We’ll also be passing the site (on the Col de Mente, on stage 8) where Ocana crashed out of the tour, whilst in yellow.
4. Col de Ceyssat (stage 13) – because it was the Checkpoint 1 the year I won the Transcontinental ☺️
5. Stage 15. Selle de Fromental, Col de la Biche, Grand Colombier. It’s going to be so, so steep!”

We look forward to riding with you all. Vive le Tour!